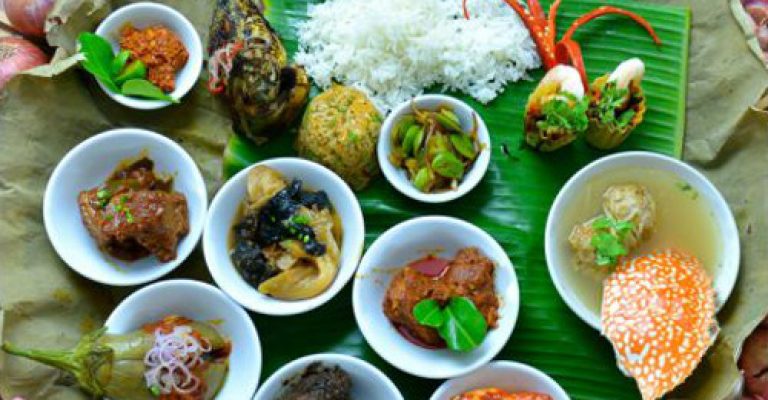 #02-01/17 Claymore Connect, 442 Orchard Road, tel: 6262-4428. Open daily, 11am-10pm. www.theperanakan.com Raymond Khoo has dabbled in French, Indian, and Spanish cuisine during his 30 years in F&B, and even hawker food concepts such as Rasa Singapura in Macau. But this 52-year-old Peranakan chef and consultant has never whipped out the family recipes, not until now. Just this week, his latest project, simply named The Peranakan, opens at Claymore Connect. This 130-seater spans about 3,000 square feet, a S$600,000 investment that returns the entrepreneur to his roots. “I’m semi-retired and getting bored, but I was thinking I should do one more cuisine for the books,” says Mr Khoo, who has been cooking Peranakan dishes for friends and family for 10 years. It took a fair amount of convincing before the bibiks in his family would relinquish the recipes. “If you want to learn, you watch – if you touch anything in the kitchen, they will scold you for spoiling their dish,” he laughs. “Every Peranakan household has different palates and recipes, and any true-blue Peranakan will insist that their mom’s cooking is the best.” That’s why he sticks to the family recipes, no gimmicks or fusion elements allowed. “I won’t serve a salad with a rendang, or do wagyu rendang, which spoils both the wagyu and the rendang.” Expect soups such as itek tim (duck and salted vegetable; S$7) and bakwan kepiting (crabmeat, prawn and meat balls with bamboo shoots; S$9), or classic mains such as udang gala rempah nenas (prawns in pineapple gravy; S$27) and satay babi (pork belly satay; S$19). There are also sharing platters called “tok panjang” menus (referencing traditional long-table banquets) at S$45 and S$65. These feature signature items like ngoh hiang, kueh pie tee, beef rendang, and even nasi ulam, a cold rice and herbs salad that’s rarely seen these days – even in Peranakan restaurants. While Mr Khoo keeps the recipes traditional, he’s also come up with degustation menus at S$188 or S$288 (requires one-week advance booking) to cater to the corporate crowd. “Some have told us excitedly that they can finally entertain their clients with local food here now!” he says. He hopes these tasting menus will also draw foreigners and expatriates. It’s all about plating and portioning, while controlling the direction of the tasting, he says, which makes the cuisine less intimidating for foreign palates. “Sometimes, foreign guests may love the dishes but they get overwhelmed with all the flavours in communal Peranakan dining, and they don’t know what they are eating,” says Mr Khoo, who is in fact prepping the restaurant for an American couple’s wedding next week. Future plans include Peranakan cafes in the vein of Toast Box or Hong Kong cafes, with dishes averaging S$10. “Peranakan is going casual, going hip, and it’s becoming more accessible,” says Mr Khoo. “Currently, you can only have say, buah keluak if you go to a proper restaurant. With a cafe concept, you can have buah keluak any time.” Expect playful spins at these cafes, such as coconut linguine instead of coconut cream in traditional desserts like pulut hitam or chendol.

168 Telok Ayer Street, tel: 8688-3028. Open Mon-Fri, 7.30am-6pm; Sat & Sun, 9am-6pm. www.facebook.com/chongwengecafe Chong Wen Ge cafe is a doorway to the past. The first thing that greets you is a three-story pagoda, right smack in the centre of a stone courtyard. Look to the left, and you’ll find the cafe’s indoor seating area, complete with old-school wooden furniture on a Peranakan-tiled floor. It’s all part of the Thiam Hock Keng temple complex – one of the oldest Hokkien temples in Singapore which is also considered a national monument. So it’s only apt that you won’t be finding things such as waffles, eggs Benedict, or truffle fries on their menu. Instead, what you will find is simple, no-frills servings of local heritage food, with a little more emphasis on Peranakan cuisine since one of the cafe’s founders is of Peranakan descent. That means dishes such as Nonya Curry Chicken (S$9.80), Nonya Mee Siam (S$6.80), and Nonya Laksa (S$8.80), alongside Satay Bee Hoon (S$8.80) and Sambal Prawns with Rice (S$8.90). “Our cafe’s founders wanted to raise awareness about our cultural roots, that’s why they didn’t want to focus on things such as cappuccinos or lattes, they wanted kopi. And I’m pleasantly surprised that we sell about 10 cups of traditional kopi for every cup of ‘modern’ coffee,” says Grace Soh, who does marketing and design for the cafe, and is the daughter of one of the founders. She explains that the 30-seater cafe was started just three weeks ago by a group of friends – all middle-aged adults with their own day jobs. Since most of them preferred to be silent shareholders, Ms Soh runs the day-to-day operations together with just one of the shareholders – Sharlene Peh, who is in charge of the kitchen. While Ms Peh is not a chef by training, she picked up her skills through experience as a home cook and from previously running her own cafe (now closed), plus some coaching from a friend who works as a professional consultant chef. It’s all about sincerity for them, says Ms Soh. “We don’t claim to be an authentic Peranakan restaurant, but we try to convey sincerity through our food, service and ambience. We get feedback before we put new dishes on the menu, especially from people who are Peranakan. Because although we ourselves aren’t Peranakan by blood, we want to try to make our food as honest as possible.”

#01-01, 18 Mohamed Sultan Road, tel: 6733-4794. Open Mon-Sat, noon-11pm. www.ippin-jpc.com Peranakan-Japanese food sounds totally bizarre, but Ippin Cafe Bar – a Japanese home-style eatery – is out to prove that “fusion” isn’t necessarily a dirty word when it comes to culinary experimentation. This pairing isn’t all that odd when you consider how much of Japanese food draws from unlikely sources – Castella cakes from the Portuguese, “wafu” pasta from the Italians, or Hamburg steaks from the Germans. This 11/2 year-old restaurant only started introducing Peranakan-Japanese dishes this week, in collaboration with chef consultant Philip Chia. Chef Chia is a family friend to the Fujishiro family which owns Ippin, and they have worked together on various culinary events prior to this menu revamp. “We became very good friends, and he would use Japanese products like miso for Peranakan dishes and bring them to us for tasting – we found them so delicious,” says marketing manager Ayumi Fujishiro, daughter of Ippin’s chairman Masaki Fujishiro. “Chef Chia then suggested that we do it officially at the cafe, and we also always wanted to show how we can use Japanese ingredients in local cooking.” It’s also her hope that the Peranakan additions to their menu will encourage their expatriate regulars – such as Japanese tai-tais – to be more adventurous when it comes to appreciating Singaporean food and culture. “Many Japanese housewives here can’t speak English and just hang out within the community; they are in Singapore but they only visit Isetan and Meidi-Ya, or go to Lau Pa Sat and claim they have been to hawker centres,” says Ms Fujishiro, who has been here for two years. “It’s so wasted; they are in Singapore – they should try more local food!” On his end, chef Chia adapts traditional recipes so they are not too overwhelming. “I retain the essence of the Peranakan flavour, but make tweaks so it’s a healthier choice and not too heavy. Miso for instance can be used over taucheo (fermented soya bean paste),” says chef Chia. Dashi is also to replace stock bases in dishes such as Nonya laksa with prawns and oysters (S$24) or pong tahu (beancurd meatball soup, S$10), resulting in lighter and cleaner flavours while keeping the fragrance. Meats in the tau yew bak (braised pork belly in a bun; S$10 for two) or the ayam goreng kunyit halia (fried chicken wings in turmeric and ginger; S$10 for five) are also marinated with sake and shoyu. His fusion dishes are inspired by a trip to Yokohama in 2013: “I was intrigued by Japanese cooking: while some say it’s bland in some ways, it’s so much healthier with less salt, oil and sugar, so I feel we should adapt some of what they are doing.” While there are only five Peranakan items available currently, chef Chia will add five more dishes every month, with a grand total of 30 by the end of the year. Also in the pipeline: finger food or otsumami, to be paired with sake and beer. Expect canapes such as buah keluak caviar on wafers or papadum with satay babi. Source: http://www.herworldplus.com/solutions/solutions/review-3-new-restaurants-check-out-good-peranakan-food?slide=3