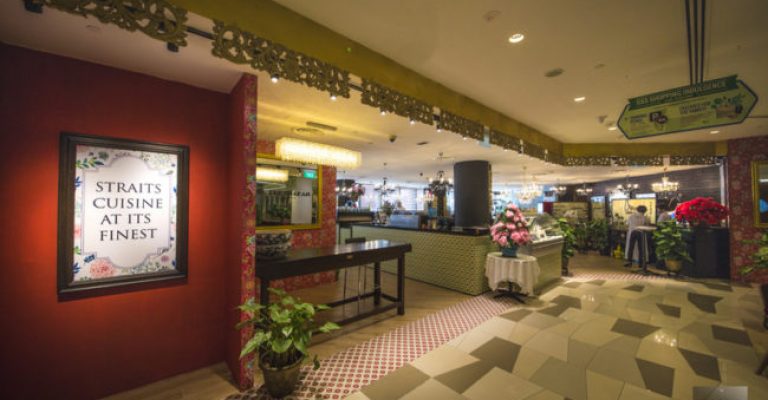 Rather than try to describe the space and decor of this new Peranakan Restaurant along Orchard Road, we think it would be easier if we shut up and let the pictures speak a few thousand words.

Quite beautiful right? The charm of the Peranakan Restaurant Claymore Connect extends beyond the structural space. The place is also littered with small details and paraphernalia that are retro and Straits Chinese inspired.

Here are pictures of some parts of the Peranakan Restaurant menu. In addition to the ala carte menu, there is a degustation and  two “Tok Panjang” menus. The six-course degustation menu costs $85 per person. There are two tok panjang menus that cost $45 and $65 per person.  We ordered some assorted items from the a la carte menu.

The nasi ulam ($15) was a cold rice salad with vegetables, minced and salted fish. Quite an unusual dish for us. The initial taste was not very nice as we were not used to the cold rice. But after the first few mouthfuls, the taste started to grow on us. The crunch of the vegetables and the scattered saltiness of the fish eventually won us over.

The kaki babi ponteh ($19) had apparently been slow cooked for six hours. We can’t verify that, but we can confirm that the pork was cooked till really tender. The tasty gravy made this an excellent companion with steamed rice.

The nonya chap chye ($15), a staple in Peranakan restaurants, was surprisingly ordinary, considering the standard of the other dishes.

Satay Babi Sum Chan ($19) was satay without sticks, made with pieces of pork belly. We are not sure about this, but we guess “sum chan” is derived from the Teochew or Hokkien words sar chang bak – three layers of meat. The mix of fatty and lean meat made it easy to eat. The portion was very small, probably equivalent to six sticks of satay, making this quite an expensive dish.

Now we show you the two types of dessert that we tried. The first was glutinous rice with durian ($5).  We can’t tell which type of durian was used but it was very good – creamy and complex with a hint of bitterness. This combination of durian and glutinous rice went very well. It comes in a small portion, so there is no danger of feeling ‘jelat’.

The other dessert that we tried was a more common bo bo cha cha ($3.50). This was good but not as spectacular as the first.

All in all, our lunch at the new Peranakan Restaurant Claymore Connect, Orchard Hotel was an enjoyable experience. Good food in a beautiful peranakan restaurant setting and service that was friendly and warm. Source: https://ordinarypatrons.com/2016/06/21/new-peranakan-restaurant-claymore-orchard-review/

We are an authentic Straits cuisine restaurant in Singapore. Executive Chef Raymond Khoo and his team serve three generations of delicious 'mesti-cuba' (must-try) Peranakan recipes, lovingly handed down by the Nonyas and Babas in his family, now brought to your table. Find out modafinil prices in USA